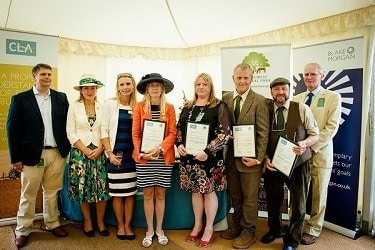 The CLA and New Forest National Park Authority have announced the winners of their 2015 joint awards.

The awards are presented to local people and businesses which have made an exceptional contribution to maintaining the unique landscape and way of life of the New Forest.

Winner of the Young Farmer/Commoner award, Pete Niccolls, received a cast iron wren trophy at the award ceremony in the main show ring at the New Forest Show. The three other winners were presented with bespoke wooden awards crafted by Eric Gibbons, a wood turner based in Boldre, near Lymington.

Pete Niccolls was chosen as Young Farmer/Commoner of the Year for his forward thinking approach to commoning, as well as his support for other farmers and commoners. He has continued to grow his herd and the judges were impressed by his ‘field to fork’ approach to his beef.

The judges selected Alison Slingo of Paws Deli in Lymington as Best Supporter of Local Produce, commenting that she has built her business around ensuring that all ingredients are sourced locally.

The 2015 Sustainability Champion, Dave Dibden, is the inspiration behind the regeneration of Pondhead Inclosure near Lyndhurst and has worked tirelessly for many years to improve the woodland for wildlife and local people.

The awards also included a new category this year for Rural Diversification, which was presented to Mary Montagu-Scott on behalf of the Buckler’s Hard Shipwright School. The judges commented that the traditional wooden structure is a perfect example of a sympathetic rural diversification that benefits the wider business it sits within.

Highly Commended certificates were also presented to runners-up in each category:

All candidates went through a comprehensive selection process, culminating in a personal visit from a judging panel.

New Forest National Park Authority Chief Executive, Alison Barnes, said: ‘It’s been a pleasure to work with the CLA again this year to reward people whose enterprises contribute to the living, working Forest.

‘These awards are our way of celebrating the hard work of local people and providing publicity for their business or project. All shortlisted candidates and the overall winners should be very proud of their contribution to the National Park.’

Robin Edwards, CLA Director South East, added: ‘The size and strength of the rural economy is significant, with recent statistics compiled by the CLA indicating that in the New Forest area alone, landowners, farmers and rural businesses employ more than 36,000 people. These awards celebrate that success but also highlight the outstanding contribution made by many local people to conserving the natural beauty of the New Forest for future generations.’

The awards were sponsored by Blake Morgan.