The sole producer of Keyhaven lamb is celebrating great tasting success this week with her Shoulder of Mutton, achieving the most coveted rating of three Great Taste stars. The quality of Lisa Morgan’s meat cuts was also recognised with two stars each at the Great Taste Awards for Rack of Keyhaven Lamb and Leg of Keyhaven Hogget, and a further star for Keyhaven Lamb Barnsley (double loin) Chops.

The Key to Great Tasting Lamb

Lisa’s sheep are Zwartbles – a large breed that originates from Holland, meaning “black with a white blaze.” Known for making good mothers, they produce big lean lambs that are slower to mature. The lambs spend their days grazing in the fresh sea air in Keyhaven on the coast of the New Forest National Park, Hampshire. In this unique location they enjoy the rich, herby and nutritious pasture at Aubrey Farm. All of this, combined with Lisa’s attention to detail, gives the meat the distinctly great tasting flavour that has made “Keyhaven” lamb such a renowned product in a relatively short space of time. 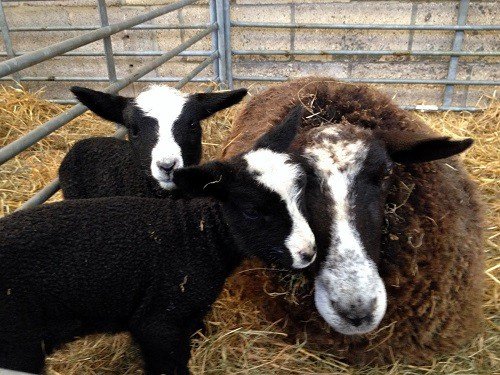 As the only producer of Keyhaven lamb, almost five years ago Lisa opened a monthly ‘pop up’ farm shop: Lisa’s Larder. This on-farm venture burst onto the regional food scene, to be awarded the Hampshire Life Food & Drink Award for Newcomer of the Year in 2013. Here she has been butchering and selling her lamb direct to customers seeking local, top quality food that is good value for money. Today the Larder is a place that not only sells fantastic seasonal produce, it is also somewhere the community can visit to learn about the countryside, food production and to interact with their local farmers.

The acknowledged benchmark for the speciality food and drink sector, recognition at the Great Taste Awards is highly sought after. Over 62 days, between March and July, more than 500 expert judges worked in teams to decide which products were worthy of one, two or three-stars. With just 4,347 of the 12,366 entries receiving stars, and only 165 foods achieving the highest rating of three stars, this top achievement places Keyhaven lamb in roughly the top 1% of entrants.

Lisa Morgan, the only producer of Keyhaven lamb, comments: “It is marvellous that our Keyhaven lamb has been recognised at the Great Taste Awards for being such high quality meat from our Zwartbles sheep. I’m particularly proud of the coveted three stars for our Mutton Shoulder. Mutton is often sadly forgotten but is one of the most flavoursome cuts and we are delighted it is now being re-discovered and celebrated. This Great Taste recognition confirms that Keyhaven lamb is the best Mutton that people can buy. It’s exciting times ahead as we have always sold Keyhaven lamb exclusively from Lisa’s Larder, and very soon we will be able to take orders for nationwide deliveries via our website – both to trade and directly to your door!”.”

One of this year’s comments from the judging table at the Great Taste Awards described Keyhaven lamb’s three star winner as; “Judges were jostling to photograph and eat this. Melt in the mouth, tender, moist without being fatty with crisp skin. A stonking piece of lamb.”