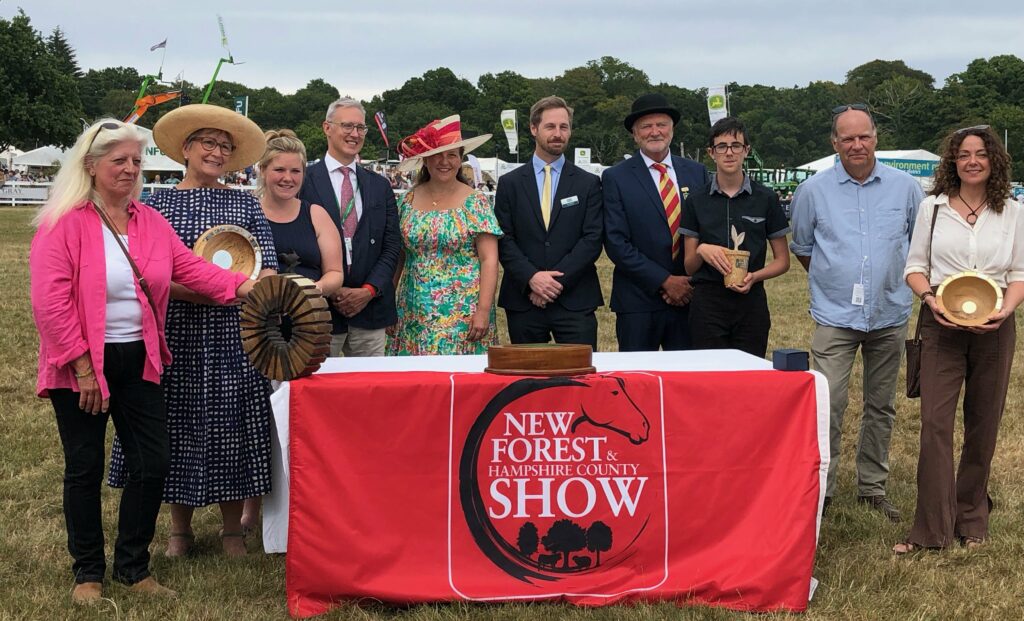 A trio of New Forest Marque members were crowned winners in the 2022 New Forest National Park Awards this week.

The New Forest National Park Authority and the CLA announced the winners of the awards at the New Forest and Hampshire County Show on Wednesday.

Now in their ninth year, the awards celebrate the wonderful people who support the New Forest’s environment and rural economy. This year a record 130 nominations were received for the best businesses, organisations and individual champions in the New Forest who help keep it a living, working landscape.

Marque members Setley Ridge Farm Shop, Tatchbury Manor Farm and Countryside Education Trust were among the winners who were recognised at a special ceremony, with individual trophies presented by Martin Stewart, Managing Director of Stewarts Garden Centres. Marque members The New Forest Hamper Company and The Naked Pantry were highly commended by the judges.

The winners of the 2022 awards, sponsored by Moore Barlow, were:

This year’s Best Supporter of Local Produce, Setley Ridge Farm Shop, impressed the judges with its huge range of locally-produced goods as well as the valued support it gives its suppliers. Producers are regularly invited to showcase products at the shop itself as well as through links on the website. A huge passion for supporting and promoting local produce is clearly at the heart of the business.

Paul Girling, owner of Setley Ridge Farm Shop, said: ‘It was a real boost to us and our staff to win this award. We are New Forest Marque members and are passionate about supporting as many other local producers as possible. Residents and tourists alike are also increasingly interested in seeking out the best food and drink from the New Forest and we are proud to be a part of that.’

The winner of the Rural Diversification category was Tatchbury Manor Farm. Owner Sarah Hunt has made her 30 acre livestock farm more financially viable by diversifying in several areas. She lost her husband during the pandemic but this hasn’t stopped her from throwing herself into her work, growing her pie business, and converting a mobile home into the ‘Pig Patch’ which is popular with families visiting Peppa Pig World and helping guests develop a greater understanding of farming. Sarah has also recently built a wood-fired bakery, using local wood and flour, and has planted an orchard.

Sarah said: ‘I was absolutely thrilled to win this award, as I’ve worked hard to make the changes and make the farm more viable since the pandemic. This recognition goes a long way to making it all worthwhile for myself and for all those who have supported me, good friends, a brilliant team and wonderful customers.’

The Sustainability Champion 2022 was the Countryside Education Trust (CET), noted for being an exemplar of sustainable operations well as promoting sustainability through education courses. This year its brand-new exhibition and eco education space, The Fort Climate Centre, will be completed – built to ensure that the highest environmental standard for insultation, lighting and waste management are all considered and mitigated. The CET is also a working productive farm and is involved with woodland management and restoration projects.

Jane Cooper, Chief Executive of the Countryside Education Trust, said: ‘The Countryside Education Trust has been a pioneer of conservation and sustainability since 1975.  More recently we have been involved in a number of new initiatives around improving water use, reinvigorating habitats for rare species and engaging young people in a pioneering climate and environment project.’

This year’s Highly Commended were:

New Forest National Park Authority Chief Executive Alison Barnes said: ‘It’s a real pleasure to be back at the New Forest Show with the CLA, recognising the people who do so much for the New Forest National Park. Given the challenges of the past couple of years, it’s a testament to their resilience and determination, which really shines through. I’ve long said that it takes a Team New Forest to champion the National Park – by acting collectively to ensure the Forest continues to thrive and is fit for the future, especially in the face of the climate and nature emergencies. Our winners have demonstrated this through their work in areas such as commoning, sustainable practices, and supporting local produce.’

Tim Bamford, Regional Director of CLA South East which represents farmers, landowners and rural businesses across the New Forest, Hampshire and beyond, said: ‘A very warm congratulations to all of our deserving winners, who make such a contribution to Forest life, community and the environment. The CLA is pleased to help celebrate their achievements once again this year, and we were heartened to see nominations arrive high in both quality and quantity. To have a record-breaking number of entries for our ninth awards is impressive, and we’re already looking forward to our tenth in 2023 already. I would like to thank everyone who took the time to apply, as well as our partners Moore Barlow for their continued support.’

About the New Forest Marque

← Fun for all the familySkills Support for the Workforce in Solent →