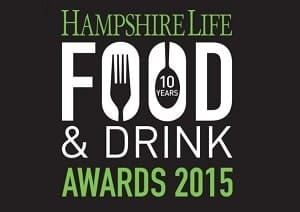 Meanwhile Matthew Tomkinson, of the Montagu Arms hotel, Beaulieu, was named Hotel Chef of the Year (fewer than 250 covers) at the industry’s prestigious Hotel Catey Awards in London.

The Award winners and runners-up at the ceremony at Careys Manor, Brockenhurst, were:

Jane Overall, New Forest Marque Chairman, said there are currently 150 members in the scheme with businesses only allowed to use the trademarked symbol if they meet stringent criteria.

She said: ‘The food, drink and hospitality scene in the New Forest is really exceptional, as the number of awards received by our members proves.

‘I would like to sincerely congratulate our hard-working producers, retailers and restaurateurs who not only provide first-class food, drink and customer service, but through their businesses are supporting our precious New Forest landscape.’

You can meet a number of New Forest Marque businesses at the New Forest Christmas Fair this Saturday and Sunday (5 and 6 December) at New Park, Brockenhurst, from 10am to 4pm.

← Where to get your New Forest Marque Turkeys for ChristmasBread Sauce →