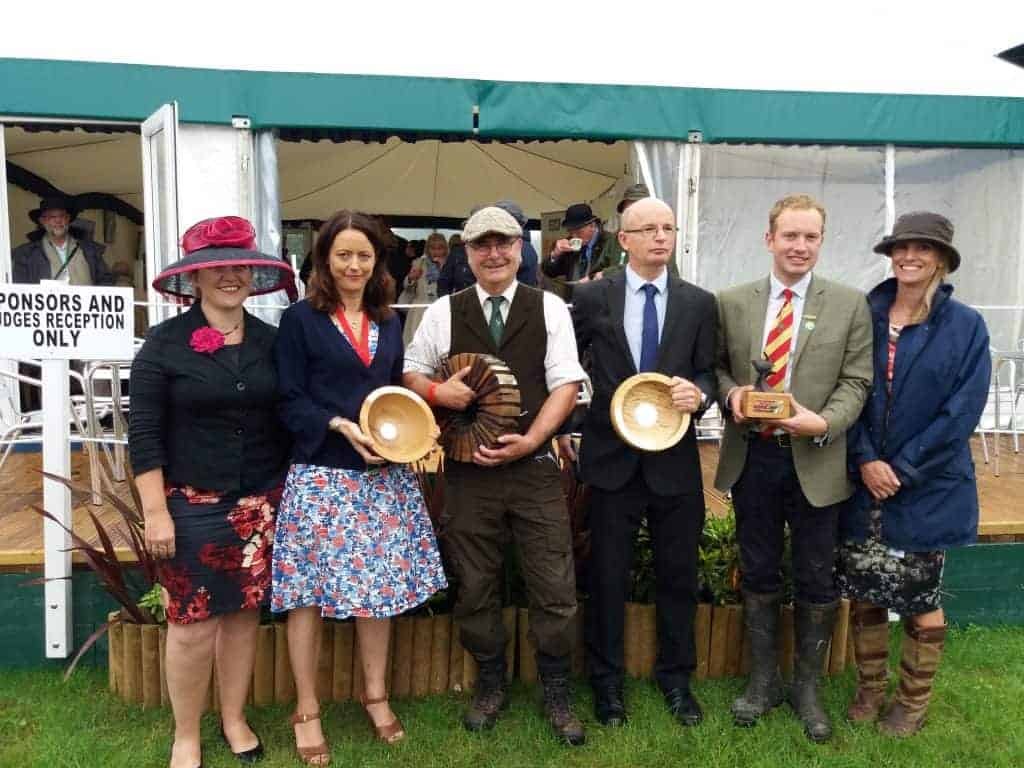 Passion for local produce and woodcraft, contributions to the commoning community and a talent for inspiring young people about sustainability were the recipe for success at this year’s New Forest awards.

The CLA and New Forest National Park Authority Awards recognise the best of the Forest’s rural businesses, organisations and volunteers and were presented at a special ceremony at the New Forest and Hampshire County Show by Show Presidents Geoff and Judy Morgan.

Oliver Cook won the Young Farmer/Commoner award for his ability to expertly juggle the pressures of a demanding full time job with commoning commitments. He takes a leading role in the commoning community, running the New Forest Young Commoners, as well as caring for his own ponies and cattle. The judges said Oliver is committed to tackling the issues facing commoners and ensuring the commoning system thrives in the future.

A special award was also presented to Peter Fogarty who has overcome significant challenges in his life to become a committed and accomplished commoner.

The expansion of Rosie Lea’s from a tea shop in Brockenhurst to run a new café and farm shop at Setley Ridge is a real Forest success story and won its owner Rachel Rabbetts the title of Best Supporter of Local Produce.

Rachel is passionate about local produce and supporting producers in the New Forest. The judges were particularly impressed that with the farm shop now building its range of local products, the site is set to become the hub for New Forest Marque produce.

The award of Sustainability Champion to Nicky Cook of Hounsdown School, recognised her ability to inspire young minds and staff members alike to pick up and run with her sustainability projects. Nicky took the school through its first Green Flag Award eight years ago and has now achieved four Green Flag awards, an impressive feat for a busy secondary school.

The work of woodlander Paul Brockman at Hoburne Bashley Holiday Park highlighted the outstanding results which can be achieved from active woodland management.

The judges commented that Paul’s passion for what he does is evident in the woodcraft school’s organic growth which he has developed, giving children the chance to develop and learn in an environment which mainstream schooling cannot offer. They also commended the Hoburne Group for their support and ability to see the benefits that bringing the woodland back into management could offer their business and the wider community.

Alison Barnes, chief executive of the New Forest National Park Authority, said: ‘It is now our fifth year running these awards with the CLA and they have developed into a shining example of partnership working. It is great to be able to show our appreciation through these awards for the many individuals and businesses who help protect and enhance the National Park and whose efforts make an important contribution to ensuring the New Forest remains a living working Forest.’

CLA South East Regional Director Robin Edwards, said: ‘This year’s winners highlight once again, the hugely important role played by farmers and other rural businesses in managing the landscape and helping our local communities prosper. This year, for the first time, we were delighted to open the rural diversification category to businesses across Hampshire as well as the New Forest and we look forward to receiving many more innovative rural success stories next year.’

The awards are sponsored by Moore Blatch and supported by the New Forest Agricultural Show Society.

Highly commended certificates were presented to: