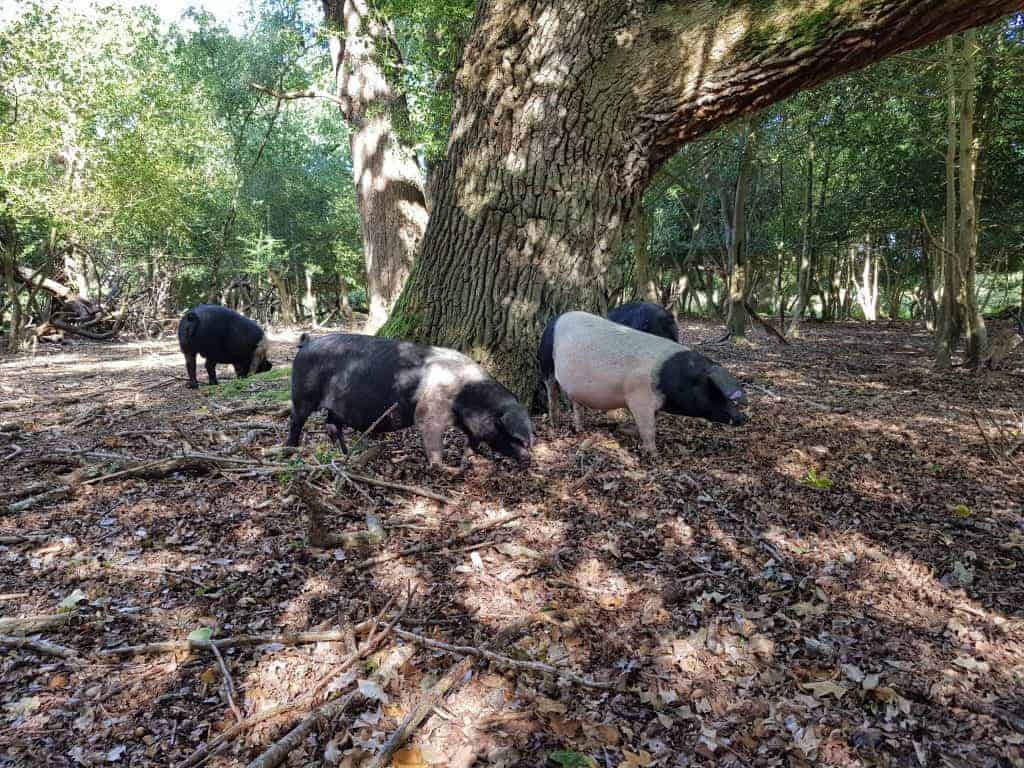 Release the pigs! written by Matt Stroud of the New Forest National Park Authority for their Park Life newspaper.

Nestled in a quiet part of the New Forest, down a long, tree-lined track, Storms Farm is certainly a challenge to find.

The attractive stone farmhouse at Cadnam, with its ginger tom on constant guard, seems a world away from the hustle and bustle of modern life.

But venture within and you will find that this is no sleepy smallholding, cut off from the outside world. This is a bustling, lively farm adapting ancient Forest traditions for the present day. 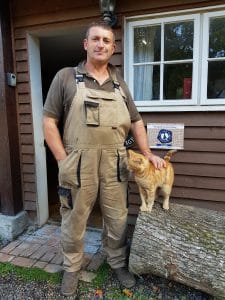 Its owner, commoner Andrew Parry-Norton, is tall, jocular and unstintingly friendly. His passion and pride for his animals is infectious. As we trundle round his farm on a super-charged golf buggy, Andrew tells me his story.

Above the din of the engine, he recounts how his family have run this farm for four generations, that his brother and he now own half each and the ways in which they have had to adapt. The family are proud commoners, turning sheep and cattle out onto the Open Forest to graze in a tradition that stretches back hundreds of years.

After a whistle-stop tour we screech to a halt and in front of us are dozens of pigs; from hefty sows to their days-old piglets. It is an impressive and welcome sight, and this is what has brought me to Storms Farm – it’s pannage season.

Pannage sees commoners practice their right of mast and turn pigs out into the New Forest each autumn for around six weeks. The pigs hoover up fallen acorns that would otherwise prove poisonous to ponies and cattle.

With this year’s acorns falling fast, pannage is upon us and today is the day that Andrew releases his pigs from his fields into the woodlands that border his farm.

He drives the trailer full of porkers the few hundred yards to the edge of the woodland (‘It’s easier that way, absolute chaos if I try to shepherd them round myself!’ he says) and I watch as he opens the trailer gates. After a few sniffs and some tentative steps, the young pigs clatter down the ramp and snuffle off into the woodland fringes.

Grunting to each other to ensure they stay together, the pigs seem very content to my untrained eyes. Pannage obviously makes them happy, but what’s in it for Andrew? 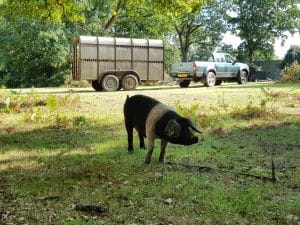 ‘There are the obvious benefits for the ponies, protecting them from the acorns, but a big reason is that it makes the pork taste fantastic,’ he said. ‘The diet of acorns gives the pork a rich, full flavour that is unlike anything you will taste in the supermarkets.’

As the pigs wander off into the woodland where they will stay for the next two or three months, we pack away the trailer and return to the farmhouse.

He said: ‘It’s like no pork you’ve ever tasted. Meaty, full of flavour and the crackling is incredible. It’s a premium product – turning our pigs out means their pork is a real speciality and a product unique to the New Forest. There is a real demand among people, increasingly so, for local meat that is traceable and local.’

Local produce is clearly important to Andrew. He cannot compete on price with larger farms so he rears high quality livestock and places their New Forest upbringing at the forefront of his marketing. The fact that his pigs are turned out to gorge on acorns among the ancient woodlands of the New Forest is unusual and makes their meat highly desirable.

This belief in local produce has led Andrew to join the New Forest Marque, an accreditation scheme that denotes genuine New Forest produce.

‘We joined the New Forest Marque relatively recently and it’s been a real benefit,’ Andrew said. ‘It proves that our produce is from the New Forest and people look for it, it’s a recognised brand – it’s been a real help with our marketing. We’ve also met a lot of like-minded producers through the Marque, who are interested in our product and can help our business grow.’

With the pigs safely released, it’s time to leave Andrew to his never-ending list of jobs around the farm. As he waves me off from his farmhouse door, I’m left with a sense that focusing on the New Forest provenance of their meat is a smart move from this family farm.

Meat from free-roaming animals that graze among some of the most beautiful and precious land in the country – now that’s what I call a unique selling point.

Look out for pannage pork at local butchers and farm shops or find out more at www.newforestmarque.co.uk.