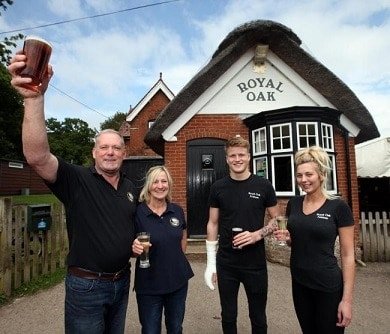 The Royal Oak pub in Fritham may be one of the smallest watering holes in Hampshire but what it lacks in size it more than makes up for in character and reputation.

In 2012 the Royal Oak was awarded the prestigious title of Best Country Pub by the Good Pub Guide for the second time.

Now the Royal Oak has been named Pub of the Year by the Southern Hampshire branch of CAMRA – the Campaign for Real Ale.

Built in 1600 the pub is renowned for its crackling log fire, low-beamed ceilings and traditional country food.

Despite being situated at the end of a long narrow lane it attracts customers from a wide area, plus a large number of tourists.

Neil McCulloch has run the business with his wife Pauline since 1998.

He said: “We have tried to keep to our original aim of running a traditional village pub. We specialize in cask ale served as intended – straight from the cask by gravity without the use of hand pumps or gas.

“Over time the number and variety of ales we serve has greatly increased.

“Our range of drinks includes rum-flavoured beer at Christmas and green-coloured beer in spring, plus mild in May and light hoppy beers in the summer.”

Neil and Pauline praised the support they received from their two daughters, Jenna and Cathy, fellow villager Clive Bowring and the pub’s long-serving staff.

Neil said: “We have been able to produce a high quality offering of ales and locally- sourced food which has enabled us to attract many customers, some of whom have been kind enough to vote for us.

“We are very proud to have won this award.”