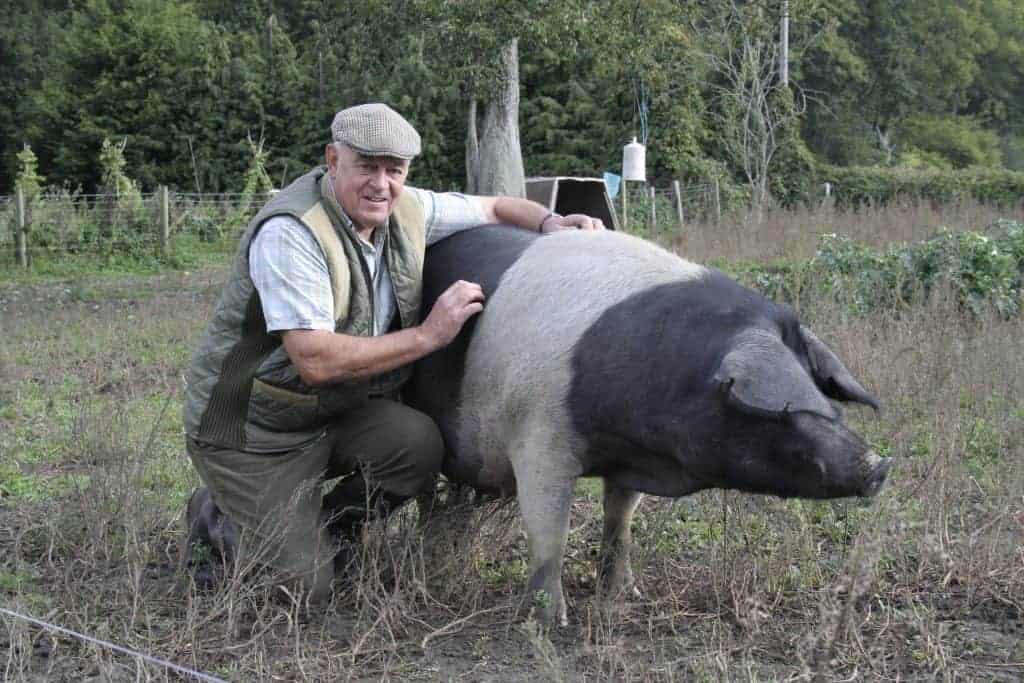 We are sad to share the news that Roy Hunt sadly passed away in December. Roy and his pigs were regular star attractions at the Local Produce Show and he had supported the New Forest Marque and Forest Friendly Farming from the very beginning. Our thoughts and sympathies are with Sarah and his family at this sad time.

FARMER Roy Hunt, who was a popular figure at the New Forest Show where he organised the pig section of the local food and farming display, has died at the age of 80.

Well known for running Tatchbury Manor Farm and the farm shop in Winsor, Copythorne, with his wife Sarah, Roy received many awards for his free range pork, including the Hampshire Food and Drink Producer of the Year in 2006.

Born at the Fenwick Hospital in Lyndhurst in January 1940, Roy grew up in a farming family, spending his early childhood at Kent’s Farm in Winsor, before his parents moved to Tatchbury Manor Farm.

After attending Bartley School, Roy followed his mother’s advice to learn a trade, and became a master cabinet-maker fitting mahogany labs in schools across the country.

He later worked for a local building company and then as a refrigeration installer, before becoming a senior cellar man for IndCoope Brewery, undertaking repairs in pubs across Hampshire.

Roy was always involved in helping out at the family farm, however, returning for harvest and haymaking, and milking the dairy herd.
When Roy’s father developed angina, he and his younger sister Julia became more involved in running the 40-acre farm.

Roy also undertook haymaking and animal transportation for many of the other smaller farming enterprises across the district.

He supported the New Forest Marque and Forest Friendly Farming from the very beginning.

He loved being involved with the New Forest Show where he was well known for taking a sow and litter of piglets every year to exhibit in the local food and farming area where he spent hours talking to the public.

One of his greatest memories was meeting the Queen and Prince Philip during their visit to the three-day event in 2012.

Roy was also known for catering events with his hog roasts. On one occasion, he and the family fed more than 1,000 people with a hog roast in Salisbury market to celebrate its reopening at the end of the 2001 foot and mouth epidemic. He also helped running the pig auctions at Salisbury Market.

He met his wife Sarah 13 years ago and together the couple developed Tatchbury Manor Farm shop into a thriving local business, selling free range pork from the farm and other locally reared meat and produce.

Sarah’s love of baking also saw them expand their range of pies and savouries which they also sold at Hampshire Farmers’ Markets stalls and supplied to other local food businesses.

They won many awards and prizes for their home-reared pork products.

Sarah said: “Roy was very sociable and popular – he loved chatting to the many customers and appeared on [TV show] James Martin: Home Comforts.”

He was very proud of his nieces Karen Jayne and Marie and had a special bond with two of his great-nieces Sophie and Lucy, who have both gone on to pursue careers in agriculture.

Roy developed cancer around four years ago and received care from Southampton General Hospital, Oakhaven Hospice and the district nursing team, who supported Sarah so he could remain at home until his death. The couple held a number of events to raise money for Macmillan Cancer Care.

Roy’s funeral has taken place and Sarah and the family plan to hold a fundraising event for Oakhaven Hospice in his memory when restrictions ease. Donations in Roy’s memory can go to RABI (Royal Agricultural Benevolent Institution) or Oakhaven Hospice.